In the early 1900’s, two artists named Pablo Picasso and Georges Braque developed a new style of painting which transformed objects, landscapes, and people into geometric shapes. A year later, Louis Vauxcelles, an art critic, saw some paintings by Georges Braque in this style at an exhibition in Paris, and described them as “bizarreries cubiques” which translates as “cubist oddities”. And so, cubism was born.

The differences between cubist still life paintings and earlier more traditional still life paintings are striking and by comparing the two, it’s easy to see what made cubism look so radically different from other painting styles at the time. Cubist paintings often “break the rules” of more realistic paintings. For example, cubist works may play with colors to make differentiating between objects more difficult. Cubist paintings also forgo the use of perspective; the background and subject often appear to sit on the same level, without an illusion of receding space.

You may be wondering what inspired Picasso and Braque to eliminate perspective from their works. They believed that perspective and shadow was a kind of trickery that did not provide the viewer with a real experience of the object. Instead, the goal of cubist art was to show things as they really are, rather than just showing what they look like. This, they felt, gave the viewer a more accurate understanding of a person, landscape, or object by painting it from different angles and viewpoints. The artists used flat geometric shapes to represent these different angles and sides of their subjects.

Breaking down our three-dimensional world into flat geometric shapes suited the cubists’ belief that a painting shouldn’t pretend to be a window’s view into a realistic scene. Instead, canvases should behave like the flat surfaces they are.

Picasso’s Les Demoiselles d'Avignon was a shocking piece for a number of reasons. While nude subjects were not unusual for the time, Picasso’s depiction of sex workers in sexual postures was novel. The painting was considered immoral when exhibited in public in 1916 and Braque was one of a handful of artists who studied it intently in 1907. This led to the two artists later collaboration.

As a pre-Cubist piece, Picasso chose to abandon the Renaissance illusion of three-dimensionality and instead flattened the picture plane. He also incorporated the geometric shards that would soon come to be a staple in cubist paintings.

Houses at L'Estaque (1908) by Georges Braque

Born out of collaboration with Picasso, Braque’s Houses at L'Estaque features influence from Picasso’s early cubist works and the work of Paul Cézanne. Braque adapted the uni-directional, uniform brushwork and flat spacing from Cézanne, while incorporating the geometric shapes and simplification of form from Picasso. In addition, Braque flattened the plane, minimizing depth and shading, to make the landscapes and houses appear to overlap. 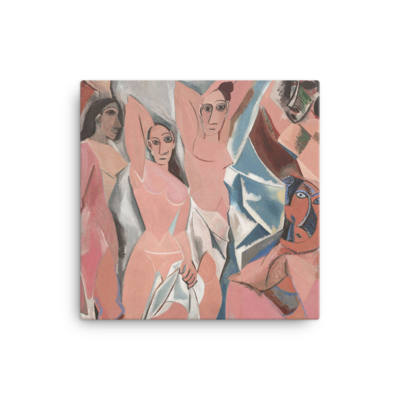